Dad’s are integral in their children’s life. This past Sunday in my sermon I mentioned that Dad’s should be involved in various roles that may not have always been culturally traditional. In my view, babies and children need moms and dads present. Dads can and should be involved with diaper changes, bathing, dressing, brushing hair & teeth, and dozens of other responsibilities that moms are often known for accomplishing with their children. Undoubtedly, moms are indispensable. I cannot imagine trying to raise children – much more 5 of them – without my wife! However, my point is that fathers should have an equal involvement and influence on their children. 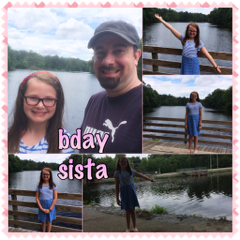 Recent as yesterday, one of my cherished involvements was a “Daddy-Daughter Date” with my oldest on her birthday. Dads who date their daughters set the example for them how a man should treat a woman, and hopefully the characteristics she will look for in a future mate. Even more, dads can provide an example relationship of the Heavenly Father and how God loves and leads the child. It’s literally a humbling and awesome responsibility.

Further, here are 25 reasons based on social science studies that reveal the effects fathers—or their absence—have on children:

1. Fathers’ engagement in their children’s activities is linked to higher academic performance. (Source)

2. Among adolescent boys, those who receive more parenting from their fathers are less likely to exhibit anti-social and delinquent behaviors. (Source)

3. Among adolescent girls, those who have a strong relationship with their fathers are less likely to report experiencing depression. (Source)

4. Close father-adolescent bonds protect against the negative influence of peer drug use. (Source)

5. Adolescent girls who have a close relationship with their fathers are more likely to delay sexual activity. (Source)

6. Adolescent girls whose fathers were present during their childhood are less likely to become pregnant. (Source)

7. Adolescent males who report a close relationship with their fathers are more likely to anticipate having a stable marriage in the future. (Source)

8. On average, adolescents who spent time with fathers doing leisure activities, such as playing games, talking, visiting friends, and engaging in outdoor or athletic activities, reported being more engaged in and enjoying the activities. (Source)

10. Teens who experienced changes in their fathers’ presence in the home during early childhood reported, on average, lower grades. (Source)

13. For male adolescents, each change in parental marital status (e.g., divorce, remarriage, separation, etc.) between age six and 11 increased the males’ odds of engaging in sexual intercourse by 37 percent. (Source)

15. When compared to adolescent males that lived with both biological parents at age 14, those living with a single mother at age 14 had almost twice the odds of ever having impregnated a girl. (Source)

16. African-American boys who grow up in an intact home headed by their biological parents are less likely to end up delinquent than their peers growing up in a home without a father (Source)

17. Young African American men and women are significantly more likely to graduate from college if they hail from an intact biological family, compared to single-mother homes. (Source)

20. Studies on substance abuse have found that father absence affects their children’s likelihood of smoking cigarettes and using drugs and alcohol. (Source)

21. Adolescents who reported having closer relationships with their fathers tended to report lower levels of psychological distress (e.g., how often they feel sad, tense, lonely, excited, happy) compared to peers who reported being less close with their fathers, controlling for family structure, adolescents’ age, gender, race/ethnicity, family income, and relationships with their mothers. (Source)

22. Adolescents who reported having more positive relationships with their fathers were less likely to be arrested, sell drugs, attack another individual, carry a handgun, belong to a gang, damage or destroy property, steal, run away, or receive/ possess/sell stolen property compared to peers who reported having less positive relationships with their fathers.  (Source)

24. Throughout childhood (from birth, infancy to age four, age five to nine, age 10 to 14, and age 15 to 17), growing up without a father was associated with higher odds of incarceration later in life, even after controlling for mother’s education, whether or not mother gave birth as a teen, race, urban and regional residence, neighborhood socioeconomic status, family income, family size, and age. Individuals who grew up in households without ever experiencing the presence of a father tended to have the highest odds of incarceration. (Source)