àYou know, God is always open to hearing your questions. It does not matter the topic or trial you face.

Peter’s question is about when someone (“my brother” indicates a believer) sins against him, how many times should forgiveness be granted. Up to seven times?” And Jesus responded, “I tell you, not seven times but seventy-seven (or seventy times seven) times.” Peter thought he was being gracious offering 7x since within Judaism, 3x was sufficient to show a forgiving spirit.[1] However, Jesus was not offering an exact number (77 or 490) times to forgive someone. He was saying that forgiving others is unlimited or untrackable.

Jesus teaches that forgiveness is required and essential to life.

We cannot live without forgiveness because we are fallen people. We are sinners in need of God’s mercy and grace. We are unholy standing before a holy God.

These illus. help us to realize that in our clothes of sin or childhood abilities, we cannot face God alone.

Hebrews 10:27 “It is a fearful thing to fall into the hands of the living God”

Luke 12:4 “Do not fear those who kill the body… fear him who after death has authority to cast into hell”

We need a mediator. We need mercy. We need forgiveness.

Psalm 130:3-4 “If you, O Lord, kept a record of sins, O Lord, who could stand? But with you there is forgiveness; therefore you are feared.”

Exodus 34:6b-7a “The Lord, the Lord, the compassionate and gracious God, slow to anger, abounding in love and faithfulness, maintaining love to thousands, and forgiving wickedness, rebellion and sin.”

After Jesus taught Peter about the essential nature of forgiveness he told a story. The story is about a servant man who owed the king an insurmountable amount of money; over 20 years worth of wages. By today’s standards it would be around $10-20billion. The king, knowing the servant could not pay, sentenced the servant to be sold into slavery with his wife and children. Seeing no way to make payment and desperately wanting to avoid separation from his family, the servant begged for patience and fell down [προσκυνέω – proskuneo] before the king.

Seeking forgiveness is intense because of the guilt and grave consequences.

Seeking forgiveness is intimate because it endears and entrusts your entire self before the person.

Out of compassion and pity the king amazingly forgave the debt.

The forgiveness of such a massive debt is illustrative of God’s forgiveness of the human sin debt. There is no way humans can repay God for his forgiveness. It can only be accepted by grace through faith. This should be a relief to stop striving to earn acceptance before God. God simply wants us to view salvation as a great gift (Hebrews 2:3), receive it by faith (Romans 10:9-13) and revel in appreciation of your salvation (Romans 11:35-36).

How is God’s forgiveness a relief to you?

–          Relief physically and emotionally (stress, tired, burden bearing, unhealthy, anger…) Psalm 32:1-5 “when I kept silent my bones wasted away… dried up… but in confession I am free”

After the servant experienced massive forgiveness he met one of his workers who similarly owed him a debt. The money was substantially smaller than what he owed, approximately $10-20 thousand. The difference is like your personal debt compared to the national debt.

After receiving grace he should have been more likely to give it. Yet, the servant was unwilling [no desire or taste for compassion] to offer the same forgiveness for his fellow worker. Instead, he placed in prison for his inability to pay. 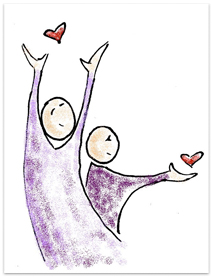 Jesus uses this story to teach that forgiveness of others is linked to God’s forgiveness of us. Those who understand the depths of God’s grace dispensed into their life should share it with others. You have the ability to forgive because you have been forgiven. If forgiveness is not reciprocated then that person has not or will not truly experience God’s forgiveness.

Unforgiveness results in bitterness and punishment.

Ephesians 4:32 “Be kind and compassionate to one another, forgiving each other, just as in Christ God forgave you.”

Forgiveness should be reciprocating but there some instances where it will be difficult to forgive another.

Some common mistakes or myths about forgiveness include:

Forgiving others is easy. It certainly is not, just look at the cross of Jesus. Forgiveness comes at a high cost because it always involves sacrifice, hurt and disappointment. At a purely emotional level only revenge is coherent whereas forgiveness is counterintuitive. However, once a person can see the circumstance in the big picture of life, and ultimately in view of God’s grace, forgiveness becomes a choice that we must take. Though not easy it can be done.

Forgiving others is forgetting. Forgiveness is more than a feeling, it is a choice to pardon an offense, but it does not always remove all the consequences for the wrongdoing. One of the main consequences is losing trust or respect from others because your actions have become attached to your character reputation. In time, forgetting should follow forgiveness. This should happen when the offender “produces fruit in keeping with repentance” (Luke 3:8). In other words, trust must be re-earned over time to restore complete fellowship with the offended. This should not become a legalistic system where the offender can never do anything right or has his/her past forever hanging over head. The offended must learn that though forgiving is not forgetting, in time it should follow. This is the way God treats his children. He forgives eternal consequences of sin through his grace and upon confession. The relationship is secure but fellowship needs restoration which is the byproduct of progressive sanctification (1 John 1:5-10).[2]

Forgiving others is weak. Forgiveness is not a sign of weakness but actually strength. It is easy to give in to annoyance, anger, rage and bitterness. It takes great will power and self-control to exercise grace and compassion for others when we’ve been offended or hurt. Jesus endured the brutality of the cross with courage and victory, ultimately defeating sin, Satan and death. His provision of forgiveness is a profound example of power. We must follow in Jesus’ footsteps realizing that vengeance belongs to God and not us.

My friend used to be a pastor outside STL (Dittmer), MO. It was in a rural area with an old church that had a church bell. The church bell sits on top of the building and there was a rope line inside the church that if you pulled the rope the bell rang.

As long as you pulled the rope the bell would ring. He let me ring the bell and it became fun… so fun he had to tell me to stop. He said ringing the bell may be fun for you but everyone outside gets tired of listening to the bell after a while.

A lack of forgiveness is a pulling on the rope. Every ring reminds us of the wrong and makes us want to keep ringing… but forgiveness is the act of letting the rope go.

Your feelings of hurt may cause you to not forgive and you think that helps… but it doesn’t. It doesn’t help you and everyone on the outside sees it as well.

–          Are you enabling others to experience God’s forgiveness?