Preachers are known for being illustrative and exaggerative. Stories, quotes and tales all help communicate a message while retaining the listening audience both in the moment and for future memory. Jesus did much the same as He w 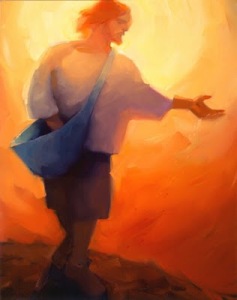 as (and still is) the master story-teller. He spoke in parables, metaphors, analogies, etc., all for the sake of effective communication. So when preachers illustrate in their sermons it is frequently to be like Jesus; though admittedly there are probably more frequent whom illustrate for lack of biblical preparation, or worse to build their own platform name and soap box of public speaking.

Above all, it is the preachers job to be clear when he is telling a story that is fiction; especially when the story is a historical reference of true individuals. If this is not done and it is found that the preacher misled (intentionally or unintentionally) then it causes the audience to doubt other remarks; especially when related to interpreting Scripture.

This was the case with me personally in reading a recent commentary by John MacArthur. MacArthur is known for his biblical exegesis. To be clear, I appreciate MacArthur’s history of preaching the gospel and defending the truth of Scripture. I do not always agree with his biblical interpretations. Sometimes I think that his views are overly forceful concerning tertiary theological views. Nonetheless, MacArthur has a positive reputation for being a preacher of God’s Word.

In John MacArthur’s commentary on 1Peter (1:10-12) he shared the following story:

The story began one summer’s day toward the end of the nineteenth century when an English city boy was on a visit to rural Scotland. That afternoon the boy went swimming in a small countryside lake. After swimming quite a distance from shore, a severe cramp seized him so that he could not continue swimming. He was in great pain and soon cried out at the top of his voice for help. A farm boy working in a nearby field heard the city boy’s screams and ran as fast as he could to the lake. There the farm boy threw off his shirt, dived into the water, swam to the imperiled city boy, and brought him safely to the shore.

Several years later the two boys met again. The city boy, still filled with gratitude that the other boy had saved his life, was thrilled to see the farm boy again and asked him what career the boy had decided to pursue. The farm boy said he had chosen a career in medicine. Since the city boy’s parents were quite wealthy and were greatly indebted to the other boy for saving their son’s life, upon hearing of the farm boy’s career choice they immediately promised to pay for his medical education. They followed through on their promise and the young man went on to have a brilliant career in scientific investigation.

In 1928 that farm boy, then both a physician and bacteriologist, discovered the famous wonder drug penicillin. In 1945 he shared the Nobel prize with two other scientists for the discovery and development of that antibiotic. That Scottish farm boy turned scientific researcher, who died in 1955, was Alexander Fleming.

The rescued city boy also gained great renown. During World War II he contracted a life-threatening case of pneumonia. He recovered at a hospital after receiving penicillin, which meant that indirectly the one-time farm boy Alexander Fleming had saved his life twice. The city boy’s name was Winston Churchill, the famous wartime British prime minister and world statesman. Interestingly, just like Fleming, Churchill won a Nobel prize. But in his instance, he won the 1953 award in literature for his incisive writings on the history of the Second World War.

It is wonderful to save a life, and even more wonderful to save someone’s life twice, especially when the one saved was such an influential person as Winston Churchill. But the hard-working, selfless contributions of Alexander Fleming are nothing compared to the greatness of saving people’s eternal souls.

MacArthur shares this illustration to point out the greatness of saving a life in human form pales in comparison to how God saved all humanity in the sacrifice and precious blood of Jesus Christ. The illustration is a great and inspiring story. However, the story is fictional. MacArthur does not state the story is not true but leaves the reader to assume it is, alongside his commentary of Scripture.

After a brief search it seems the story is legend:

Why am I sharing this?

Recently there was a kerfluffle regarding another well known pastor’s writing. Accusations of plagiarism and ghost writing have been mentioned. I’m unsure of the conclusion or outcome of the circumstances. My point in this post is simply to show that unfortunately this sort of thing happens to multiple pastors. I’m not sure if MacArthur had this section delegated to write by a research assistant or if this was his own writing. I’m unsure if MacArthur was provided this story illustration and he used it unintentionally as a true story. Every preacher is tempted to share a quick quote or story to make a point without verifying the source or its truth. Unfortunately, that is the business of public speaking

However, what I am sure of is that preachers are held to a high standard (2Timothy 2:15; James 3:1). These scenarios show us that we fall short. Brothers, we must illustrate but we must do so wisely. We must give pause to our writing and our words. If we are unsure about accuracy or truthfulness then it would be better we just leave it out. I found this brother’s principles wise and timely. It would be better for us to make a point reflecting from the Scriptures and perhaps come off as dry or dull then to communicate dynamically and be dead wrong.