The Great Evangelical Recession: 6 Factors that Will Crash the American Church and How to Prepare, by John S. Dickerson. Grand Rapids: Baker, 2013. 247 pages. Review by David W. Brown. 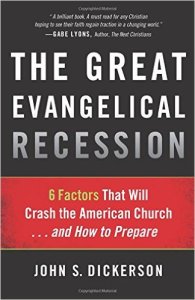 The crisis alarm for the American church has sounded in John Dickerson’s book The Great Evangelical Recession. Dickerson is an evangelical pastor and award-winning journalist, writing to alarm the church and call it to action in reversing current recession trends. The declining trends are the typical church measurements in bodies, buildings, and budgets, but it is more than these in an overall culture clash. Culture is changing at rapid pace and those who ignore the warning signs will become its victims (13). The book is divided into two parts with the first six chapters diagnosis of six trends with each a chapter explanation: 1) Inflated numbers; 2) Hated by external host culture; 3) Division of the church based on political values; 4) Bankrupt of finances as a wealthy and generous generation passes; 5) Bleeding internally by losing not just outsiders but insiders, with a failure to retain children of evangelical families; 6) Sputtering growth as evangelicalism declines while population growth rapidly surges.

The second part of the book is prescriptive offering six potential solutions for the church: 1) Re-valuing priorities; 2) Good works of relational service; 3) Unity among essential doctrines of Scripture; 4) Financial solvency through hybrid ministry of both vocational and bi-vocational staff and conservation of debt; 5) Healing the bleeding loss of disciples within the church by minimizing superfluous ministry programming; 6) Re-igniting evangelism in the ordinary everyday and among every individual believer.

Dickerson’s book would be helpful for all who care about the future of the gospel and the Christian church. The strengths of the book are not the least but four. The first is its biblical faithfulness and prophetic edge. Many books that address the topic of Christianity with culture stray from truth, but Dickerson can be trusted. Multiple chapters open with an insightful Scripture verse or passage that relates to the theme of either a declining trend or proposed solution. The verses become points of meditation to ponder how God worked in the biblical context and how it may apply currently. A second strength is the fact that Dickerson writes of the wide spectrum of evangelicalism from the likes of Bill Hybels, Andy Stanley, and Rick Warren, to others such as John MacArthur, David Platt, and Tim Keller. However, Dickerson is not so wide-viewed to not define evangelicalism to affirm core doctrines of Scripture, Trinity, depravity of man, substitutionary atonement, Christ’s complete humanity and deity, and salvation exclusively through Jesus Christ (155-160, 229-232). Thirdly, Dickerson aids the reader with mental pictures and numbers to visualize his points. One example is picturing evangelicals not as broadly scattered across all fifty United States but simply fitting inside New York State, while non-believers fit in all other forty-nine states (34-35). Another example is the percentages and graphs representing seventy-percent of a church’s financial donations dropping in the next twenty-five (84-95). This number and graph stands out to awaken the current generation of church leaders to prioritize disciple-making and prepare with wise financial stewardship. Dickerson’s aggregation of statistical research is a helpful means to discern current trends in evangelicalism. A last but not least strength of the book is Dickerson’s proposed solutions. Each prescription is based on practical and easy to implement ideas and not just theory.

A minor weakness of the book is perhaps an overemphasis on the specific sin of homosexuality. While this issue is prevalent in society it is not the only issue related to evangelicalism’s decline. A second critique is a slight hint of contradiction in the author’s prescription for financial stewardship and hybrid ministry, while his own church rapidly hired numerous pastoral and ministry staff (170, 213). Overall, this book is a much needed read to open the eyes of Christians and church leaders today.

The below videos are an interview with the book author hosted at Dallas Theological Seminary.