All elections are important, and this one is no different. America will vote its 45th POTUS. Many voters have or are deciding which candidate best aligns with their personal values and political views, and in many people’s view “the lesser of two evils”; while still others will write in or select a third party option.

Undoubtedly #Election2016 has flawed candidates with Hillary Clinton and Donald Trump. Either choice will have significant downfalls and sacrifices for their parties. Voting third-party or write-in makes a statement that an individual’s vote must be earned and not assumed. However, a candidate outside the two major parties is highly unlikely to succeed. I’m not saying such a vote should not be cast and perhaps should be, but an honest evaluation of reality is that one of the two major parties will be POTUS. So what is a nation to do with flawed candidates? More specifically, how should Christians respond once the election is complete?

I do not intend to advocate which candidate to vote. As a Pastor, most recently I have sought to equip you with a foundation for understanding the character for leadership which God desires, as well as where our ultimate allegiance belongs. Previously I’ve also encouraged you toward VIP Voting – Vote In Principles. In other words, voting according to biblical principles found in the God’s Word.

o   **We must extend grace and space[1] to those who differ on specific candidates, and prioritize God’s kingdom that will last eternally over an earthly temporal kingdom. We must trust in God’s sovereignty to ordain and utilize those in authority to accomplish His kingdom purposes in ways we cannot see; which is helpful to understand for either candidate.

More so, my hope is to awaken Christians and the church to what will matter for eternity. God’s kingdom is everlasting. Heaven and hell are permanent destinations. Therefore, Christians should place a greater emphasis and energy, time, talent, and treasure into saving the lost than on saving a political system. The Christian’s mission is far greater than a single country but extends internationally to “every tribe and language and people and nation” (Revelation 5:9). America’s mess must not hinder Jesus’ mission for the church.

So, as Christians, we must grow more sincere and sober-minded in our faith (1Peter 4:7). By grace, we must courageously live out the content and character of Jesus’ truth. We should persevere in standing and supporting the cause of justice for those the world devalues and degrades. We should engage culture as “salt and light” so people praise God more than applaud our service (Matthew 5:13-16). And yes, as a means to love our neighbors we should vote to God’s glory, and as able serve in the government arena for the good of others. Yet, we must seek to leave a legacy that goes beyond earthly politics but for eternal kingdoms (Revelation 11:15b).

Christian leaders, pastor’s, and those who have a voice that carries influence must reflect the example of the prophet Samuel with Israel. Samuel knew Israel’s king would be a flawed candidate. Samuel did not compromise, but instead called the nation to follow God. He knew their only hope would not be with a fallen leader but in a faithful Lord. Likewise, Christians must trust in God alone and not worldly powers or politics. Let us heed the word of the Lord or there is no hope for any of us.

“The Lord will not abandon His people, because of His great name and because He has determined to make you His own people. “As for me, I vow that I will not sin against the Lord by ceasing to pray for you. I will teach you the good and right way. Above all, fear the Lord and worship Him faithfully with all your heart; consider the great things He has done for you. However, if you continue to do what is evil, both you and your king will be swept away” (1 Samuel 12:22-25).

To continue exhorting us to focus on God’s kingdom, let us engage Jesus’ teaching in Matthew 22. 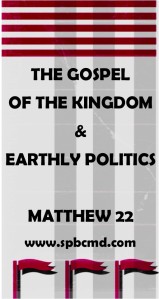 g of the Jews and of the entire world (2:2). In light of Jesus’ kingship, this parable helps us understand how to live as a citizen in the world we live. The parable references a king who gave a wedding feast for his son. The king invites a great gathering to celebrate the wedding. He has prepared a delightful and delicious dinner with oxen and fat calves; everything is ready (22:4).

However, the citizens ignored the invitation. Some were indifferent while others were injurious to the king’s servants, even murdering them (22:5-6; cf Matt 5:11-13; Heb 11:34-38). The king responded with judgment and justice upon these servants by sending in his soldiers to destroy them. Further, the king still celebrated the wedding feat by inviting outsiders.

“Coming to a wedding feat required some commitment of valuable time on the part of guests (Jewish hearers would assume a feast lasting seven days, and a king would expect his guests to remain throughout the feast); this commitment would be difficult for peasants working the land. But the honor of being invited by a king – and the terror of displeasing him – would have motivated intelligent invitees to attend… Ignoring the king would be scandalously rude, would probably suggest treasonous feelings and would certainly invite a king’s wrath; this parable’s original hearers would thus feel incensed at these subjects’ unbelievable stupidity.”[2]

Once the wedding occurred and was full with guests, the king noticed a person who had no wedding garment. In other words, he was not dressed appropriately for attending a royal wedding. The idea is not that the person did not have appropriate clothes to wear, but that they chose simply not to wear them. In response, the king removed him from participating in the wedding and His kingdom.

What can we learn in application from this parable?

–       God desires His kingdom to be full. He sends multiple servants with multiple invitations.

o   à If God wants His kingdom to be full, why do Christians not send out and share His invitation by telling the good news?

–       God’s wedding feast is His eternal kingdom for us to prioritize.

o   God’s joy should be our journey. Christian’s exists to glorify God by growing godly generations.

Jesus’ teachings were audacious and authoritative. He posed such a great threat that His enemies sought to mix religion and politics in order to remove Him. The Pharisees and Herodians, not normal allies, plotted together seeking to entangle Jesus. They start with flattery by affirming Jesus as a godly teacher and then lead seeking to force Jesus into a partisan response on paying taxes to the Roman Caesar. They thought they had Jesus cornered – either He would affirm the Roman tax and lose popularity among the Jewish crowds or He would deny the Roman tax being seen as a rebel and likely suffer His life.

In the Gospels, Jesus’ answers to questions are unique and profound. His answers are unusual in not giving direct answers but instead provoking a person to evaluate their heart values. Note Jesus’ initial response, “Why do you put me to the test, you hypocrites” (22:18)?

Jesus asked for a denarius, about 1 days wage, and responded to their question with a question of His own: “Who’s likeness [εἰκών: image] and inscription is this?” A Roman denarius would have had Caesar’s face and inscripted with the words: “Tiberius Caesar, son of the divine Augustus, Augustus”.[3]

Jesus said render to Caesar and God what belongs to each. When the people heard Jesus’ response they marveled and walked away. They realized they couldn’t entrap Him by mixing up earthly authorities and eternal realities.

While Jesus does not exactly answer the scope of Caesar’s authority, the crowds know there are limits to earthly authority under an unlimited sovereign God.

What else can we learn?

è Submission to earthly authorities is expected (cf. Romans 13:1; 1Peter 2:13-17). When Jesus spoke of respecting Caesar, and the apostles spoke of obeying government authorities, there were not speaking of a conservative environment of traditional family values. Instead, the Christian church started and even thrived in the midst of an evil and bloodthirsty empire. The Romans crucified, literally, all those who dared to stand in their way or threaten their power. How much more today?

è Serving earthly authorities is ultimately an act of worship to God. Political apathy is not acceptable, but remember that politics are not primary. In all, we must glorify God with our politics! Whether we vote or are voicing platforms in words and deeds, we should do so to the glory of God and not personal or national glory.

è Jesus’ central point was that His followers are citizens of 2 kingdoms: Heaven and Earth (Php 3:20-21).

o   We are “sojourners and exiles” belonging to a greater kingdom that will outlast our current nation (Hebrews 12:28; 1Peter 2:11-12)

o   We are to live as salt and light