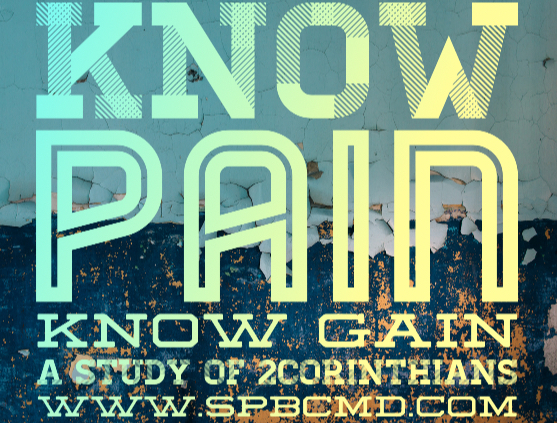 Know Pain, Know Gain: A study in 2Corinthians. Today we start new series in this book for 2 reasons:

Paul an apostle of Christ Jesus by God’s will

[with] Timothy our brother

To God’s church at Corinth

àChristians should recognize the impact and influence that emanates from strategic cities.

Paul gives praise to God even in the midst of suffering. He’s setting the tone of the letter as praise Godward and not pity manward. Paul is also a realist and not attempting to hide his feelings, but interpreting them through the lens of faith. That is what makes Paul to appealing to us. God uses those the most who have experienced significant suffering. Scars become stories. In fact, it is seldom said that a person grows the most without trial or has been influenced by others who have never experienced suffering. The most depth and development comes from those who have lived through loss and persevered through trials.

Paul points us to the person of God.

Illus: Who has experienced turbulence on an airplane? If you have, it’s always a bit nerve-racking. Usually, you buckle or tighten your seat belt. You hold on to the armrest, clinch your neighbors hand, and grind your teeth. Your mind wanders on phone calls or conversations you may need to have. And you begin to pray a bit more sincerely. Then the pilot buzzes over the loudspeaker, “We’ve run into some choppy wind, so we’re going to adjust our altitude and hopefully find some smoother air.” The pilots message calms us that he is in control and at work to correct the turbulence.
– – – That’s what we all need: To know God is there and in control, and to adjust our altitude to God’s perspective.

Paul does not want to waste his troubles or trials. Instead, he gives the Corinthians a framework for understanding suffering. Sometimes God allows suffering not just to grow our character but to groom us for ministry with others. Paul’s experiences were unrest internally and externally (cf 2Cor 2:13; 4:8-18; 7:5). Yet to Paul, his testings became testimonies; our mess becomes ministry, and yes, our hell becomes hallelujah as God’s comfort comes to us to work through us. Paul despaired of life but his dependence was upon God, who did deliver him.

Undoubtedly, trials are unwanted from us – and from God. Yet, God still permits suffering to pass through our life for His greater purposes.

Paul had significant suffering that he reveals his vulnerability with the Corinthians. He shares his personal struggle with a “thorn in the flesh, a messenger of Satan to torment me so I would not exalt self.” He pleaded with the Lord three times to remove it, but God responded, “My grace is sufficient for you, for My power is perfected in weakness,” so that Christ’s power may reside in him. Paul goes on saying, “So I take pleasure in weaknesses, insults, catastrophes, persecutions, and in pressures, because of Christ. For when I am weak, then I am strong.”

Paul’s life was marked not just by suffering but by the Savior. As God was with the Patriarch Joseph in Genesis, so God was with Paul to use him to accomplish much.

No amount of suffering exceeds God’s power to sustain and save a believer. His graces sees us through every task and trial. We never have to doubt God’s presence with us and power to deliver us. While we may struggle to discern God’s temporal or eternal purposes for our pains, we can trust God’s wisdom and goodness.