Danielle’s grandparents – Grampy had a sign hung on mantle: “Here lives an old fisherman with the catch of his life.” There’s something about the older generation that is a bit mystical heroicism with all they were able to accomplish: nation building and technological advancements (factories & products, highway system, towns & cities, etc.), military feats in World Wars, but perhaps most admired is their family heritage with many marriages lasting multiple decades and generational impact.

Today, we seem to be losing generational influence with families not living in proximity and the general separation of the family (co-habitation, divorce, redefining marriage, gender confusion, etc.).

In 2019 l have messages on family, but let’s return to a man with the catch of his life…

Jonah: A man who lived inside a great fish… fact or fiction? If you have difficulty believing this then why not

God in the book of Jonah

Three takeaways
1) God’s pursuit of Jonah reminds us of His love for His servants. God cares for the messenger as much as His message. Our work for God is not important than who we are as an individual.

2) Since the book of Jonah is known more for his mistakes than his message, we are able to identify with him – and the rest of the Bible, because it reveals who we are. Unlike other religious texts, the Bible doesn’t hide humanity of our OT or NT examples of faith. They show the true stories of vulnerable and imperfect people intersecting with the grace of God.

3) God’s grace is greater than your sin and the sins of the world that seem greater to us. Often we compare ourselves to others, thinking “they” are worse off then “me/we.” But, Jonah shows us all our sin is equally offensive to God, yet equally available to repent and find His mercy and grace.

Rebellion is personal against a holy God.

Nineveh’s actions were not overlooked by God. God is just and must punish sin. Amazingly, before God judged Assyria, He offered them a prophet to preach for their repentance. In Jonah, Nineveh did repent, but it would be shortlived for Assyria would conquer Israel in 722. About a century later (~663-612B.C.), Nahum the prophet will proclaim Nineveh’s doom and Assyria would fall to Babylon (612 B.C.)
Nahum proclaims, “Wasted is Nineveh; who will grieve for her… There is no easing your hurt; your wound is grievous. All who hear the news about you clap their hands over you. For upon whom has not come your unceasing evil?” (Nah 3:7, 19).

Jonah was called to arise and go to Nineveh, but instead he arose and went the opposite direction to Tarshish. Tarshish is unknown location, but when mentioned in Bible is 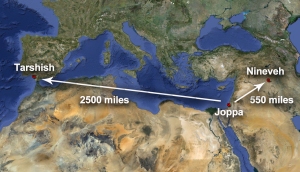 referenced with ships, believed to be on the outermost western rim of the world. Most scholars believe it’s located in Spain. Therefore, it was a distant place and certainly the opposite direction of where God commanded Jonah.
But even more, Jonah fled from the presence (pânîym/face) of the Lord (Jonah 1:3a, 3b, 10).

Why did Jonah disobey?

Rebellion is progressive without repentance.

Reading Jonah we see the progressive nature of Jonah’s sin against God.

Notice the ‘downward’ pattern of Jonah’s life. He went down to Joppa… down into the ship, away from God, and down into the ship and down to sleep. Even Jonah’s sleep was a deep, unconscious sleep.[6]  Jonah’s running was his refusal to confront his idols and himself and it turned into a chaotic storm.

Life cancer, if left untreated, sin will progress and permeate the body until its death. We cannot coddle sin. We must confront it and kill it.

Jonah’s sin was personal, but it wasn’t private. No sin is private – and no faith is private. Our sin – and our faith – have public implications. Jonah’s rebellion affected several public entities:

> Like the oxygen mask on airplane, we must breathe spiritually to help others or we can’t help others and we all die. God wants to use you to impact others… but sometimes we’re too apathetic or asleep, rather we should be on constant alert (cf. Mat 24:42).

When God’s people rebel, it is met with reproof.

The storm isn’t there to pay you back for sin, it’s meant to bring you back to the Savior.[8] God pursues us with storms to discipline and refocus the devotion of our heart. When God’s discipline is missing, then that is evidence our relationship with God is absent as well.

There’s a fairy tale of a wicked witch living in a forest cottage.[9] When travelers passed by the witch offered food and lodging. The bed was the most comfortable in all the land, but it was a bed of dark magic. If you were asleep when the sun rose, you would turn into stone. One little girl became the witch’s cottage servant and was disheartened she could not save the wandering travelers… One day wandering woman entered the forest and wanted to stay the night at the witch’s cottage. The servant girl could not bear the thought of this woman becoming trapped and transformed into stone. So, the girl kept placing thorns and thistles in the bed. The woman tossed and turned all night, not being able to sleep. She knew the servant girl was placing these obstructions in her bed and couldn’t help but wonder her motivation. Eventually the woman arose from the bed and cursed the little girl, “How could you be so inhospitable and harm my night’s rest?” The servant girl replied, “The hostility you received would be nothing like the infinite harm a comfortable night’s sleep would have been brought upon you. Those were my thorns and thistles of love.”

God puts thorns and thistles of love in our path to rescue us from drift into darkness and the horrors of hell.

Jonah knew he must sacrifice his life for the sake of sailors (Jonah 1:12).

Rebellion is telling God you’re unavailable… are you making yourself available to Jesus each day?
Lord, help me/us to be more like Jesus and less like Jonah.