Recently my father inlaw introduced my children, and myself, to the 1960 Disney movie Pollyanna. I’m uncertain why it’s one of his favorites but there were some good lessons in the movie. If you’re unfamiliar with the movie plot, essentially a young girl named Pollyanna is forced to live with her aunt because her parents died. Her aunt is wealthy with the attitude and nature of controlling other’s choices. She even directs the town preach, Rev. Ford in what and how to preach! She encourages him to preach more “fire and brimstone” to challenge the people to live in fear.

However, Pollyanna comes along and her father was a missionary preacher who spoke prevalently of the joys of faith and love of God. Pollyanna says her father only preached “happy texts.” Thus, her name has become synonymous with exaggerated optimism.

The Bible has both happy and holy texts, and both message styles are needed, with the tone matching the text. Preachers should not preach their preferred agenda points but rather the whole counsel of God, so that people can discern when they’re hearing from God or when they’re being manipulated into cult-like religion.

Today we are in one of the Bible’s most sober and severe passages. 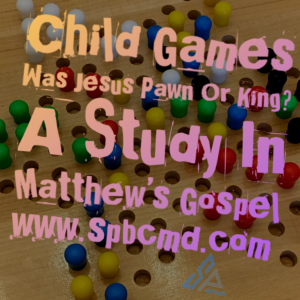 Jesus talks to crowds and to his disciples… in other words, those who are not just hearing, but those genuinely listening to His message.

Jesus describes the Pharisees as hypocrites…

In ancient Greek times play actors/actresses wore masks. If they had a comedic part, then their mask had a big smile, if a serious or somber part the mask had a straight or exaggerated frowning or crying face. The Greek term for an actor/actress was ὑποκριτής, one who assumed a character. The crowd also observed the obvious, that an external mask can hide what is happening underneath. The actor/actress is different from the character they portray. So, after time the term began to be used for one who had two faces, and eventually began to be used pejoratively for those whose actions differed from their speech.

Hypocrisy has two forms
1) Being phony. Proclaiming beliefs but not practicing them in behavioral lifestyle.

Jesus judged the Pharisees for not practicing what they preached (Mt 23:3-4). They burdened people with their teaching because they went above and beyond God’s commandments. They developed a religious system with 613 laws. They chose 613 because that’s how many separate letters were in the text of the Ten Commandments. They further divided that number with 248 affirmative commands, one for every part of the human body as they understood it. And 365 negative commands, one for each day of the year. In contrast, Jesus said His teaching and load was lighter and gave rest (Mt 11:30). He summed up all 613 laws with 2 – love God and love people, all the Law and the Prophets depend on these two commandments” (Mt 22:34-40). Religion makes sinners exhausted, but Christianity makes sinners enlivened.

2) Being prideful. Presenting to live at a higher standard than is reality; it’s a better than you attitude.

Illus: There’s a story of famed Chicago preacher D.L. Moody who was a guest preacher at another church. The alternate church leaders warning Moody that frequently members leave the service early and not to take it personally. Moody received the warning and enters the pulpit: “Today I’m going to preach to two groups of people. The first will be sinners and the next group saints. [He preaches briefly]. The next group I want to address are the saints, but if you’re a sinner you can leave now.” Members of the church noted this was one of the only times they didn’t have people leave the church early. /

– We don’t like to publicly admit that we’re sinners in need of grace.

Jesus judged the Pharisees for doing all their [righteous] deeds to be seen by others (23:5).

Both forms of hypocrisy are wrong and are characteristic of the Pharisees; of whom Jesus denounces. Ultimately, Jesus gives 7 woes against the religious leaders that inform our cautions of faith in the church.

Woe: (οὐαί). The word is used 7x and is an expression of grief, like “Ouch!” “Oh, I’m so sorry to hear that,” or an expression of condemnation, like “Enough!” “Stop right there, I don’t want to hear any more.” Each of these are griefs from God’s heart and condemnations from Jesus Christ against the Pharisee’s hypocrisy.

We are often tempted in this area if we do not equally care about doctrine and deeds, beliefs and bodies, principles and people. So, whether the topic is race, immigration, unborn, euthanasia, or a host of other topics – Christians should not stick their head in the sand or be silent. Where the word speaks – we speak, and while the Bible may not provide policy it does character for how we speak about people made in the image of God. Ultimately, we are to care about earthly and eternal suffering, and certainly if the latter is not addressed then the former becomes irrelevant. The mission of the church is not solely about a gathering, but as equipping people to scatter as salt and light for the purposes of extending God’s justice, mercy, and faithfulness.
Micah 6:8 “what does the LORD require of you but to do justice, and to love kindness, and to walk humbly with your God.”
cf. also Lev 19; 25; Ps 94:15-16; Prv 31:8-9; Ec 3:16-17; Isa 1; 10; 58; Jer 22:3-5 Am 5; Mal 3:5

As I pastor, I can be a little wary of Christians who seldom commit to church and ministry because they want more “bible studies,” or to “go deeper in study.” While I can appreciate biblical depth (I’ve devoted my life to studying and teaching the bible, with 9+ years of academic study), I have also observed many Christians are educated beyond their obedience. Today’s church doesn’t have an information famine but rather an application failure. We have abundance of resources but without their operation.

Jesus closes a sermon in the temple with a lament. He, cries for the city – God’s city – Jerusalem, whom He desired to gather under His loving protection, but they rejected Him. There has to be heartbreak and dejection over their choice that would require Him to suffer and die through crucifixion.

The house of Jerusalem would be left desolate. In the next few decades, Rome would conquer and erase the Jerusalem temple. The hope of God’s people is not in an earthly government or religious resurgence, but in the return of the coming Lord Jesus.

This message may sound like Jesus just busting and breaking the Pharisees. One of the only things that is better broken is a sinner’s heart in the hands of the Savior. Jesus is severe in this message with truth in love in order to awaken the reality to healing from the gospel not religious child games.

[1] Bishop Hilary of Poitiers, On Matthew.